The secretary pointed at a corridor to her right. “First door on your left is customs”, she said. I had just arrived in to St. John’s Antigua and was preparing to clear in to the country. I thanked her and made my way to a door that was slightly ajar. Through the crack in the door, I saw a woman in a blue uniform with her head on a desk, snoring lightly. I knocked, then took a step back to give her time to compose herself. After a “come in” wafted through the crack, I pushed the door open and entered. The woman, who introduced herself as Sage, was sitting up and blinking. She motioned me to sit in front of her desk, and pushed over a stack of forms. As I started filling them out, I saw Sage stand up to fetch something from the other side of the room. Amusingly, she had unbuttoned and unbelted her tight pants while she was sleeping. Completely unfazed, Sage held them together with one hand while she walked across the room to grab a stamp. Not bothering to rebutton, she returned to her chair. Her composure was so impressive that I was convinced this was a normal routine for her. 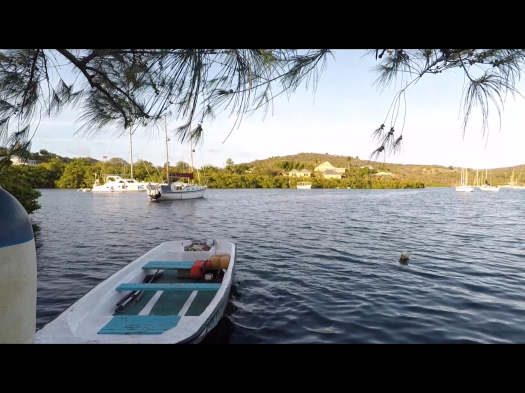 Antigua customs officials turned out to be just as friendly as all the other Carribbean countries I’d visited. Sage was a motherly woman, concerned about my well-being and sanity for sailing alone. She gave me her number and said she wanted to put me up for the night in her house. She couldn’t envision that I was getting good rest on the Geck. I thanked her profusely but explained that my boat was my home, and I didn’t want to leave her for the night. I also wasn’t happy with the place I’d anchored and was planning on leaving once I was cleared in. We bid farewell, and I returned to Gecko. 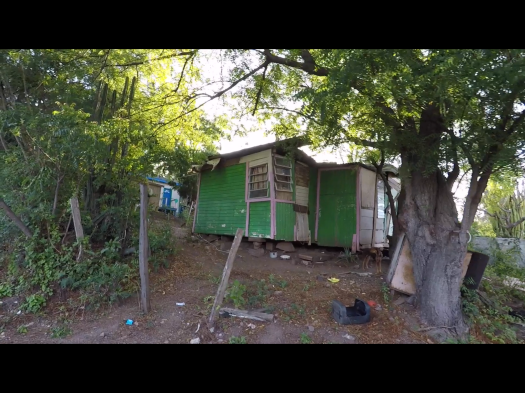 The next three nights I spend in Five Islands Bay, halfway down the western side of Antigua. Five islands is a magical location. It’s a huge bay, surrounded by green hills. Most of the land around the bay is national park, so there were almost no houses in sight. Right in the middle of the bay is an island called Maiden Island. I anchored in the lee of Maiden, and didn’t see another person come within a mile of my boat for the next three days. The water was clear and beautiful, the air sweet, and the nights full of bright stars. I set up the sailing rig on my dinghy and explored the shallow head of the bay. It was lined with deserted white sand beaches and tangly luscious undergrowth. I had finally found paradise.

I ran out of freshies on day four. Since I don’t have refrigeration, it’s hard to keep fresh vegetables for very long, and I hadn’t provisioned for more than a few days anyway. I also needed to top up my water tanks and make a hardware store run. It was time for civilization. 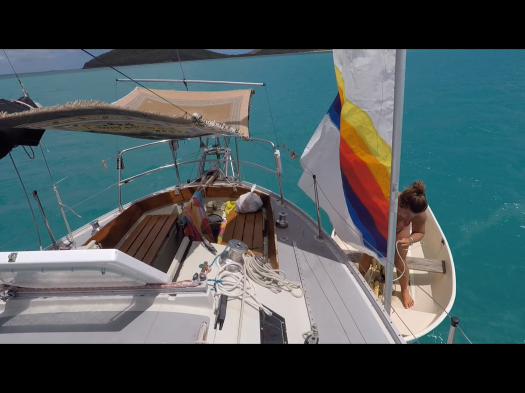 Jolly Harbor is just around the corner, and the perfect place to resupply. I arrived early in the morning and completed my errands by the afternoon. Like a hopeless addict, I upped anchor and returned to Five Islands for the night, telling myself that I had to leave for good the next morning. My plan was to sail to Falmouth, which is located on the southern side of Antigua. However, I hadn’t factored in the strong headwinds, and after a full day of sailing, and two hours spent trying to get around the southwestern corner of the island, I gave up and headed in to Carlisle Bay. 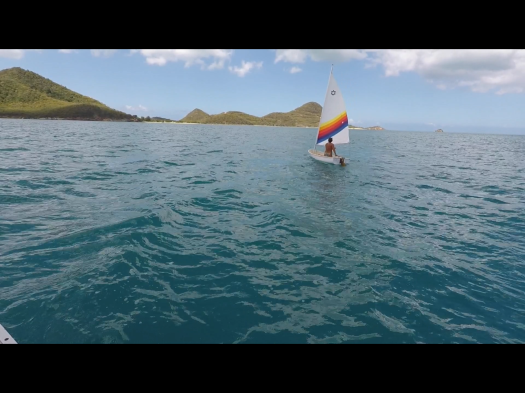 Carlisle is a tiny bay with a little beach resort and not much else. I wasn’t crazy about the location, but it would be a fine place to stop for the night. I had just finished putting away my sails for the evening when two kayaks approached my boat. They were paddled by three jolly British vacationers. We chatted and I invited them onto my boat It turns out that they were three of one hundred and fifty pharmaceutical reps who were on a work retreat. They informed me that this was their last night and they were having a big party at the resort to celebrate. “It’s an open bar. You should sneak in”. I didn’t need to be told twice.

That night, as the sun set, I heard the beginnings of the party. There was a live band, and the colorful lights twinkled all the way out to my boat. I heard what sounded like speeches and clapping. When the chatter was replaced by music, I decided to make my move. Easing into my dinghy, I rowed silently towards the beach and tied up on a small dock at the far right. Once my feet touched the sand, I straightened up confidently, and strode down the beach. The key to sneaking is looking like you belong. As the dance floor came into view, I paused and scanned for the friends I’d met earlier. Perhaps they weren’t there. Should I just go back to my boat? Suddenly a flamingo shirt caught my eye and I spied three familiar faces by the bar. My friends loudly introduced me around as the American on the boat, and quickly realized that my initial caution was unnecessary. Everyone was friendly, and nobody seemed to care that I was crashing their party. They were a lively bunch, and the rum flowed freely. Literally. Their company was going to need a crane to pick up the tab we must have left behind. We danced and chatted until the wee hours of the morning when we all parted ways. I waved to my friends as they retired to their hotel rooms. As I got back into my dinghy and rowed home, I decided Carlisle Bay wasn’t so bad afterall.