I set out from Pemaquid Harbour at around noon on October 30th with a strong tail wind, and high ambitions. My parents saw me off, lovingly attaching my jib sheets and halyards. Half an hour before I was due to leave, my dad was headfirst in my lazarette, messing around with the engine, and my mom was giving me a jar of homemade butternut squash soup. They stayed in their dinghy as I cast off the mooring lines and sailed out of the harbour. It was the best send-off I ever could have wished for.

My first evening was beautiful; I had great wind, and the gleam of adventure made everything shiny.

That night the wind died, the temperature dropped, and there were ships everywhere. I made it through the night wearing all my clothes and huddling in my sleeping bag. If you want a visual, imagine a colourful maggot clinging to a tiller and eating crackers.

By the next morning, I was near Cape Cod, and life was on a hard upward swing. I had a pod of about 10 dolphins playing in my bow wake, two little land-birds hitched a ride on my boat, and I sailed so close through a pod of whales that I was worried they would hit me (or that I would hit them). 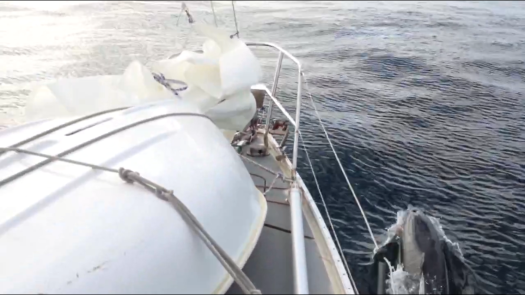 I picked up a mooring  in Province Town that night. It was blowing 20 knots, the sun was down, and I was hilariously tired. It took me three tries to grab the mooring because I kept getting blown off before I could run forward and grab it. I kept telling myself that soon I’d be happily attached, as the wind stole the curses out of my mouth and sent them flying.

The next morning I woke up at five and headed for the Cape Cod Canal. It was gloriously warm, and I spent the day cleaning my boat and singing loud nonsense songs at the top of my lungs. There’s a great freedom to being at sea by yourself.

After the Canal, I motored through Buzzard’s Bay in the dark. There was a huge weird tide rip, no moon, and unexpected swirly currents. Several years ago, I made the same trip at night when I worked aboard the Harvey Gamage. The only difference then  was that I was in charge of a watch of fifth graders, who were on the helm the whole time while I nervously jittered by their elbows. In comparison, this time was, if not a walk in the park, maybe a jog  through a bad neighbourhood.

Yesterday night I picked up a mooring in Marion and I’m waiting out some bad weather. I’m hoping to leave early tomorrow morning and see how many miles I can make before another system rolls through on the 7th. Fingers crossed!