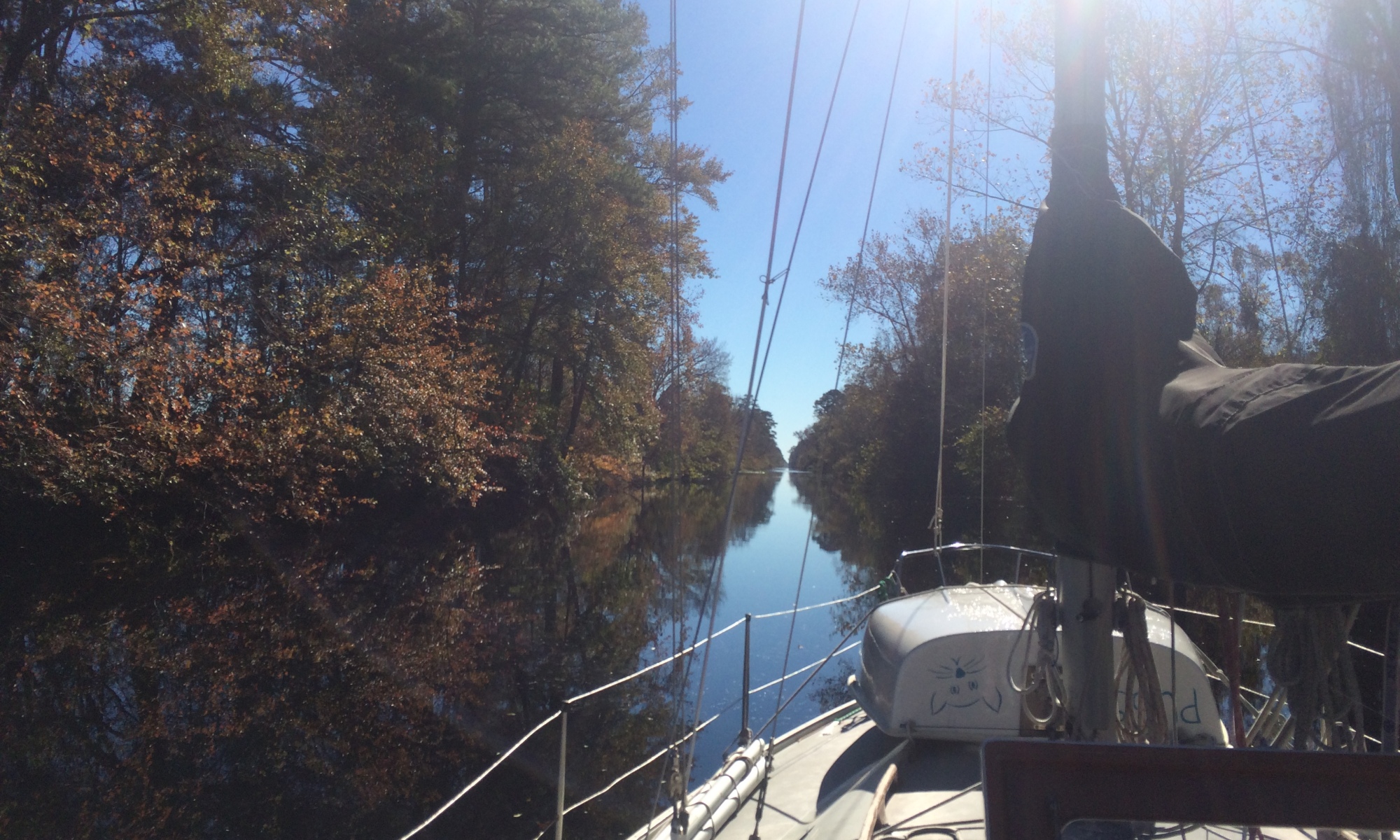 My last two weeks run to Oriental were blissful compared to the cold windy slog I made from Maine to Virginia. I ducked into the intracoastal waterway after Portsmouth and motored through the Dismal Swamp. In order to make it between two of the locks at either end, I had to crank up Geck’s little engine to 5 knots, the fastest it’s ever gone.

This was the absolute slowest I could go between the locks and make the next timed opening. To accomplish it, I had Geck’s 10-horse at full throttle. Funny smells wafted out of the cabin as all the carbon burned out of the twists in the engine piping. Luckily there was no wind or current against me, and I obsessively checked engine temp and the sea strainer to make sure I wasn’t going to overheat. I barely made the second lock, and then breathed a sigh in relief as a throttled back to a happy 3.5 knots.

I sailed down the Alligator river and anchored at one of the bends in the bottom that night. When I arrived well after dark, I saw the anchor lights of at least 10 other boats scattered throughout the two large bends that served as a protected anchorage. I had finally caught up with a fleet! The next morning I woke up with the sun and left before anyone else. Since there was no wind and I was motoring again, I was slowly passed by every boat within the first few hours. They all waved cheerily, and I felt as though I was really getting somewhere (except for the part where everyone else was getting there faster. Wherever THERE was).

I actually allowed myself to take a weather day in Belhaven (it was raining). I was ahead of schedule at that point, and I realized that I didn’t have to stand in the pouring rain all day if I didn’t want to. So I stayed below and made cookies, only venturing out for a walk during a lull in the weather. I even went for a swim in the disgusting brown water when the sun came out later.

After spending two nights in Belhaven, I sailed an easy 30-mile day and ended up anchored out in a small deserted bay halfway to Oriental. That night was the first time it was warm enough to sit in the cockpit and watch the sun set. I brought out a book and my down jacket, and felt an immense happiness settle over me. The night was whisper calm with a full moon. The water was glowing in the starlight, and I did a crazy moon dance around the deck, whooping and singing loudly at the empty night. At least I think it was empty. If anyone was trying to sleep near Bonner Bay on November 20th, I’m accepting tips for the show.

I arrived in Oriental on Novermber 21st, the day before Thanksgiving. My initial plan was to make my way into Whittaker Creek, where I would eventually be leaving my boat for the winter. However, I ran aground a couple of times in the channel so I gave up and went around to anchor by the bridge. I later found out that you have to stick close enough to the reds that you can high-five each one as you pass it. If it’s still looking sketchy, you can go outside them. And if you still can’t get in, wait for the wind direction to change and it’ll blow more water into the creek.

I spend a lovely Thanksgiving in Oriental with some old family friends, and then successfully (this time) made my way into a slip at Whittaker Creek Marina. Nine days after arriving in Oriental, I said goodbye to Gecko and got on a plane to fly back down to work. While it wasn’t the most relaxing sail, I had pushed Gecko hard and fast and made it from Maine to Oriental in 25 days. The only times I used my engine were for stretches of the intracoastal, and the occasional push if the wind died. The average wind speed I experienced was 20-25 knots, with temperatures averaging in the high thirties. Leaving the Geck to return to work was much harder than I’d anticipated. I had another work list of projects that had to be completed before I left for the Caribbean, but I hadn’t had time to start any before I took off. I patted Gecko on her stupid leaky bow and told her that I’d be back soon.

Back in Punta Arenas in the canopy of a tree

7 Replies to “Oriental and Away”