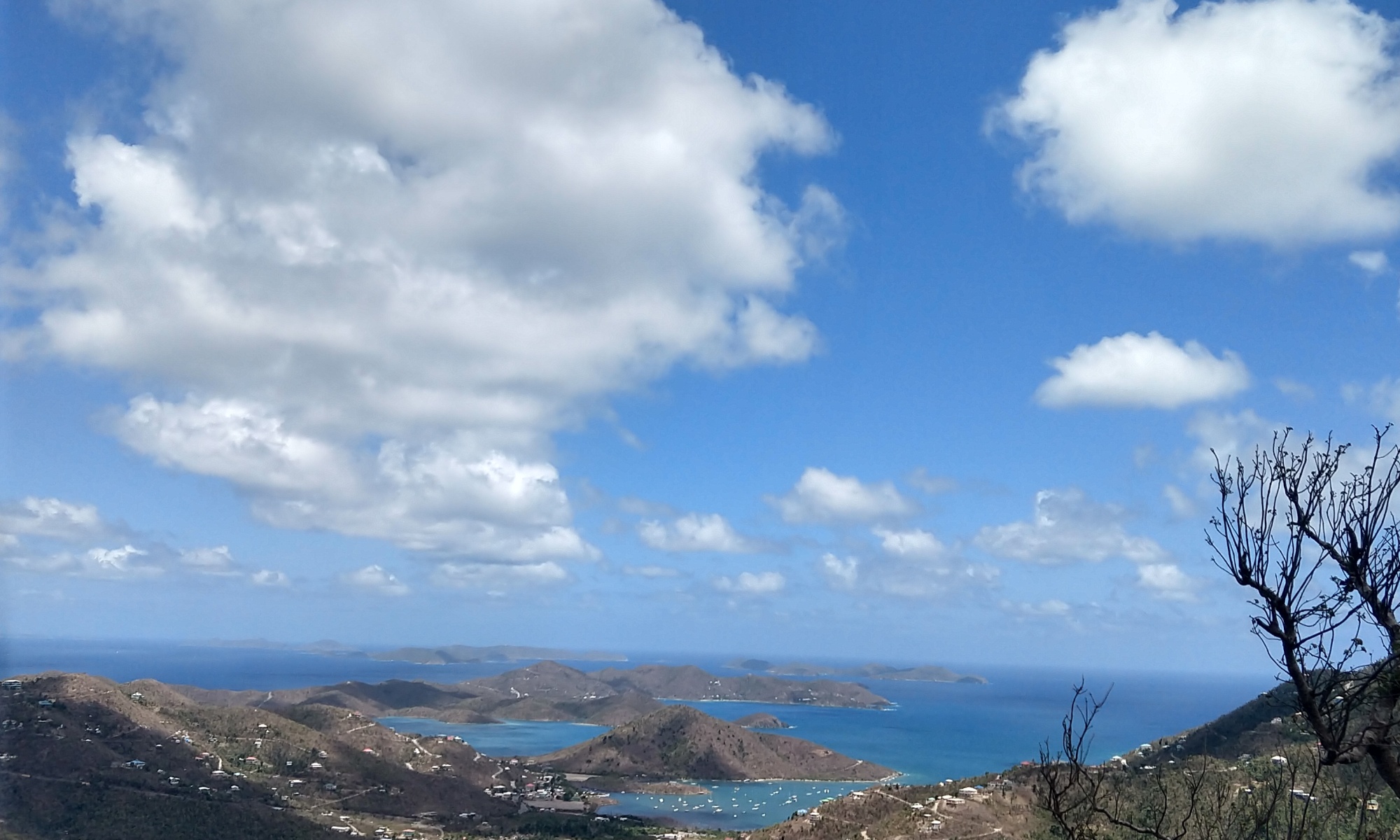 To clear out of St John’s, I hitchhiked from Coral Bay to Cruz Bay. It’s only about half an hour by road, but the sail would have set me back by a whole day since Cruz Bay is to the west, and the prevailing winds are easterlies. St. John’s was the easiest hitchhiking I’ve ever done. The first car I got in reeked of epoxy resin, so I felt right at home. A local man named Chris was driving, and he took me most of the way to Cruz Bay. On the drive, he told me about his experience with Hurricane Irma. He and his wife decided not to evacuate the island, since the house they were living in had withstood several previous ‘canes. He said what they didn’t realize was that Irma would funnel right up between St. John’s and Jost VanDyke in the BVIs. Apparently hurricanes don’t pay attention to international borders.

The top wind speed recorded was 300 miles an hour. Chris and his wife were lying in bed when their porch was blown 30 feet up into the air and then sent soaring off down the mountain. Throughout the night, the rest of their house slowly started blowing away. They heard the kitchen get torn off and flung into the sky. Then the roof blew off. The two lay in bed with the rain pouring on their faces, watching bits of their house circle in the air above them. Finally, they decided they should leave the house. Chris stood up, and a metal wall slammed into him, knocking him back onto the bed. He and his wife picked their way through the wreckage of the road to try to make it to the fire house in Coral Bay. “Everything over 12 feet was gone, man. The wind didn’t care how big around it was. It was just gone. Every telephone pole was knocked over. There were wires everywhere. It took us four hours to go only a few miles.” When Chris dropped me off, my head was reeling with his descriptions. It was hard to believe that the sleepy little island had been through so much trauma.

Once I got to Cruz Bay, clearing out was straightforward. The customs officers were surprised that I was sailing by myself, and we had the typical conversation where they said I was brave, and I said it was probably due to a shortage of brain cells. I took advantage of being in a larger town to go shopping at a ‘real’ grocery store. The prices of food on St. John make me a little weak at the knees. The locals say that if you want to do a big provisioning that you should take the ferry to St. Thomas, but I was just looking for a few freshies.

Even with a loaded shopping bag, hitching back was equally easy, and I was soon back on my boat and prepping to leave the following morning. I’ve been dreading the passage from St. John’s to St. Martin for two weeks. It’s due east, right against the trades. The wind had been blowing 15-20 for the past week with no signs of taming. I came up with a multitude of excuses to stay in Coral Bay. I told myself that the less I wanted to leave, the more it meant I had to go. With that rousing pep talk, I upped anchor and took off.

Half an hour after leaving, I tacked for the first time and noticed that the entire starboard side of my traveler was coming off. There was a good three-inch gap between it and the cabintop. Ah! Here was my excuse! Ironically, I didn’t want to stop now that I’d started, but if I sailed with the traveler like that, I’d destroy it. I dropped hook in an outer bay and did a quick fix on the traveler. The two outboard screws had stripped out of the cabin top and were free-turning. I gobbed some 4000 caulk on everything and tightened it down. Not beautiful, but it would get me to the next port. Throughout the passage, I kept the main carefully centerlined on the traveler so that it woldn’t pull unevenly on either side.

As soon as I upped anchor for the second time and rounded the headland, the full force of the weather hit me. It was snotty. Gecko was plunging into the waves, and the spray soaked me every time we dived into a fresh one. I have yet to get seasick on my boat, but the motion had me feeling a bit queasy. Again, the thought of turning back crossed my mind, but I pushed it away. This passage was going to suck, but it was short and it would be over soon. Tired of getting sprayed by every wave, I went below to lay down. That whole night, heat lightning flicked across the sky above me. At first, I turned off my battery breakers and sailed totally blacked out. Eventually, I decided that the more immediate danger was of getting hit by another boat, so I turned everything back on.

It was so rough, I was unable to do much. The first day out, I ate most of a jar of pickles for dinner. It was hot and stuffy in my cabin with all the hatches closed. I wet a pareo and laid it over my bare skin so that the evaporation would cool me off. Somehow, I slept.

The next morning was still rough, so I ate the rest of the pickles for breakfast while I checked my course. I was going to get in some time around sunset that evening. That thought cheered me up, and I went into the cockpit to tweak the sails. I was still getting soaked by every wave, and I soon became encrusted in salt. I would wash this off with buckets of saltwater. Sounds weird, but it works.

Finally, just as the sun was getting ready to disappear, I arrived in Marigot Bay, St. Martin. It’s a long approach, and I was urging Gecko forward as though she was a race-horse. The bay is packed with boats, and I didn’t want to try to find a spot to anchor among them in the dark. The wind was strong, and I was zooming in under full sail at 6.5 knots. At the last minute, I rounded up and dropped everything, then motored to the edge of the anchorage where I dropped the hook. I had just finished stowing everything when the light disappeared. 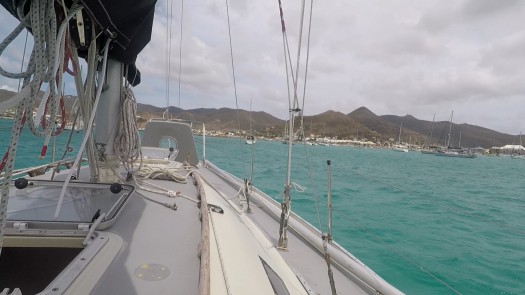 The next morning, I rowed ashore to go clear in. There were some local islanders hanging out by the dock, and one of them came up to me as I was stepping onto the pier. “Man, I thought you was a dude out there rowing!”, he said. This is the second time I’ve been mistaken for a dude while doing something on my boat. I think it’s pretty funny because I don’t exactly have a boyish figure. That day, I was wearing short shorts and had my hair in two braids. People just see what they are expecting, I guess. Since we were already chatting, I asked my new friend where Island Water World is. This is a local marine hardware store that will also clear you in somehow. “I’ll take you there, man”, I was told. We had a pleasant walk. I leaned his name was Rodrigo and that he was from Anguilla. His girlfriend lives in St. Martin, so he comes over on his boat to visit her. Rodrigo dropped me off at Island Water World and waved goodbye. 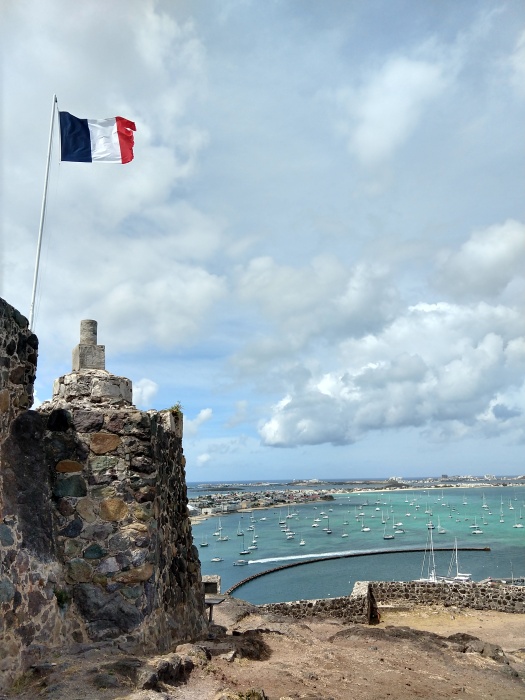 After clearing in, I wandered around town. St. Martin is French-owned, and their food is amazing. I’ve been eating so much cheese and bread and good cheap wine that I’m worried about the freeboard on my dinghy. I’ve found everyone I meet to be extremely friendly- both the local islanders and the French. I had a religious moment at the giant grocery store- the SuperU. I hadn’t been in a grocery store this nice since leaving the Statees over a month ago. The prices were reasonable, and the produce so beautiful it made me want to curl up with it on a blanket and watch the sun set. I’m planning on staying here until the end of the week, and then my next stop is going to be Antigua! The adventure never dies.

One Reply to “Pickles for Breakfast”