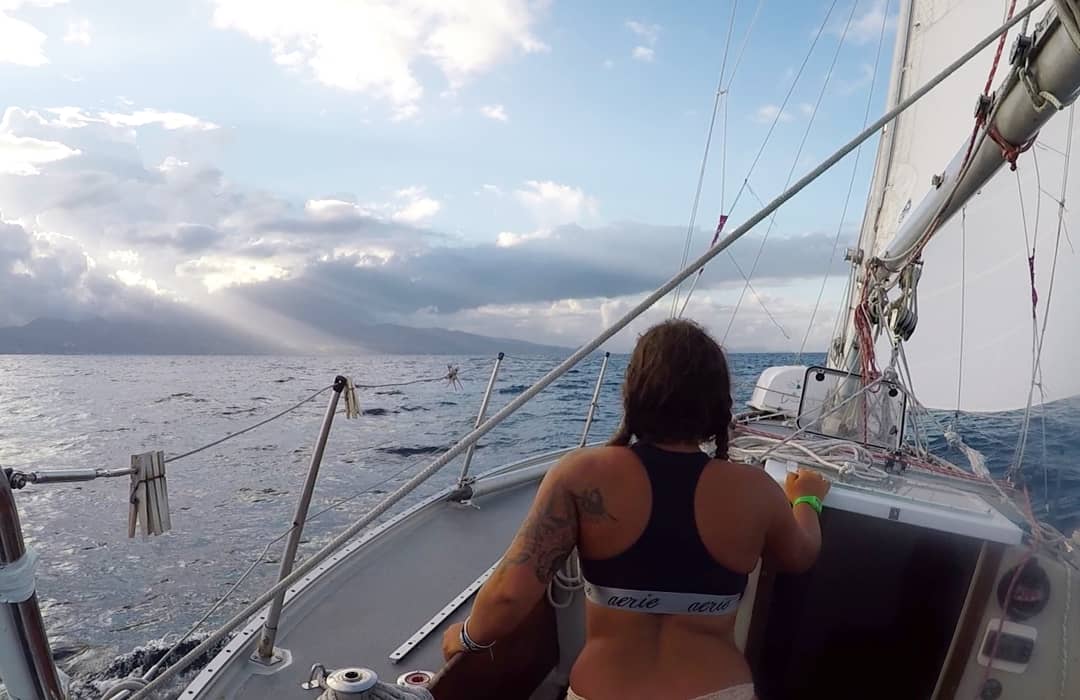 I turned my head to see a man walking out of the sailing school and down towards the dock where I was hefting a load of groceries back to my dinghy. My favorite place to tie up in Falmouth was the pier right next to the local sailing academy because it was sheltered from big boat traffic and out of the way. Antiguan dialect is strong and beautiful and I pieced more of it together every day. The man looked at me enquiringly. I repeated the word in my head a few times: wagwan… wagwan.. Oh! What’s going on!
“Not much”, I replied. “How are you?” Luckily I had guessed right and we started chatting about sailing and boats. He introduced himself as Rhone and told me that he was one of the instructors at the sailing school.

“I’m super jealous” I said, eyeing the zippy little lasers scooting around on the wind. “I so miss dinghy sailing.”
“Want to come out? I can take you tomorrow after work.”

I hastily agreed, and we made plans to meet at the dinghy dock the next afternoon. Thus started a great friendship between myself and about six or seven of the sailors associated with the academy. I hung out in the chase boat with them while they trained the little Optimist sailors in racing. They took me wakeboarding in the evenings. I hung around with the little boys and watched the fishermen casting nets for bait. The instructors let me sail the lasers and drive the case boat. It was like having a little island family.

An air of excitement hung around the sailing school, and after a few days I discovered why. The whole sailing dinghy crowd in Falmouth was getting ready for Opti Worlds, which they were hosting at the beginning of July. For those of you who are unfamiliar, Optis are tiny pram-shaped boats that are perfect for kids up to the age of fifteen. They’re great for beginner sailors because they can be capsized and righted easily, and bashed into each other without sustaining too much damage. What I didn’t know was that Optis are a world-class dinghy. The world competition this year includes sailors from more that fourty different countries, and takes place over a mile offshore. These must be some pretty gnarly kids, I thought.

My new friends invited me to stay and volunteer to help run the races, but I had to keep moving. Hurricane season is approaching, and there are still a bunch of islands I want to work my way through. It was with a heavy heart that I said goodbye to Falmouth and my sailing family, and headed back to sea.

The passage to Martinique took two days and two nights. I was skipping Guadeloupe and Dominica to head right for Martinique to do some boat repairs. I planned on looping back up to explore at least Dominica before I headed south again. Since the islands are so close together, I don’t really see a problem with doing them out of order.

The first night of the passage was squally and dark, and I was up and down constantly to drop my headsail for each burst of wind. Between squalls, the wind was a friendly 10-15 knots, and I had my big headsail up. The short bursts of wind that came with the squalls would have easily overpowered my large genoa, so I made a routine of running forward and dropping it before each gust hit. The squalls were usually accompanied by about 10 minutes of fierce downpour before the whole thing blew away and the night was mine again. Seeing squalls on a moonless night is tricky. By the time I felt the boat starting to significantly heel over, it was too late, so I had to be extra vigilant. It was imperative that I spot each squall before it hit me, but I was also trying to get some sleep. I woke up every 20 minutes to scan the horizon, and started noticing that where the squalls lay, the black night was slightly blacker than anywhere else. It was mostly overcast, so I couldn’t use lack of stars for a guide. Once a squall was spotted lurking upwind, the fun part began. I didn’t want to reduce sail too soon, or I’d be bobbing around uselessly- sometimes for up to half an hour. If I waited too long, I’d get a thorough soaking, and wrestling down the genoa would be about ten times harder. The key was to wait until the first tendrils of the squall wrapped their little fingers around the sails and tapped Gecko over a hair. Then I’d spring up and rush about, dropping the headsail, checking the course, and running below for cover. 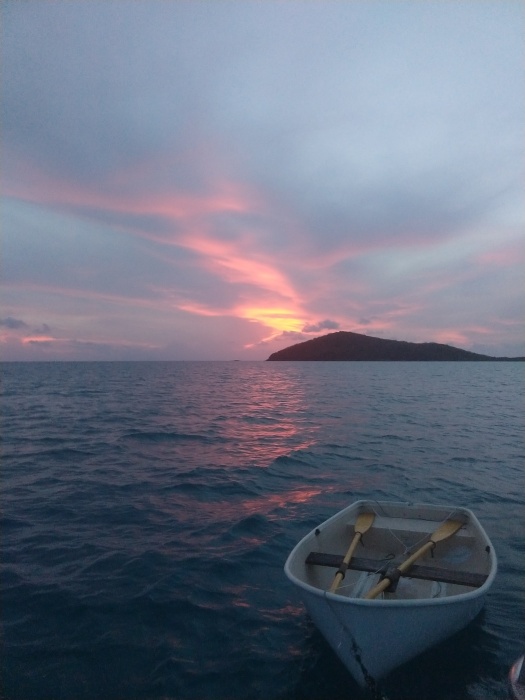 This made for an aerobic night, and by morning I was exhausted. The sailing was beautiful all day, but with the night came more tricks of the wind. Right about midnight, I was rounding the north coast of Martinique when the wind completely died. I knew about the wind shadows to the west of the islands, and had accordingly kept to the east on my sail down. Unfortunately, my destination was halfway down the west coast of Martinique. I was only a few miles offshore, and totally exhausted. I secured the sails, and tried to catch some sleep while Gecko bobbed around in circles. However, I was too nervous to sleep for more than about 10 minutes at a time. Being so close to shore without knowing the currents had me worried that I’d get pushed up onto the rocks. When the sun rose, I fired up the old engine, and motored on.

Three miles out from Fort-de-France, a huge squall overtook me. For two hours, I was bombarded by whiteout rain, and swirly winds which made it almost impossible to make forward way. Finally, wet and cold, I dropped hook in the Fort-de-France anchorage. It was Ascension day, and the whole island was closed for the holiday. Since I couldn’t clear in, I made a cup of tea and laid down for a delicious nap.